The Opening of the UAE 2021/22 Horse Racing Season 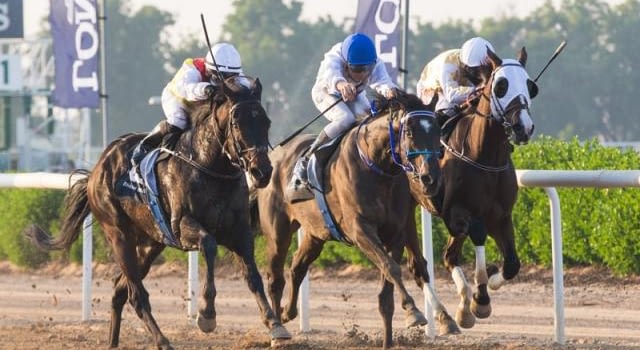 The 2021/22 flat race season got underway this weekend with races held at both Jebel Ali and Sharjah racecourses. Possibly the biggest change for fans of the sport this season, is with the new COVID protocols firmly in place, the crowds are once again permitted access to the UAE’s racecourses.

According to the UAE’s National Newspaper, the reopening of the gates at all five racecourses was announced by Sheikh Rashid bin Dalmouk, Vice Chairman of the Emirates Racing Authority.

He said, “we greatly missed our fans in the past season, and we look forward to welcoming them back following the go-ahead given by UAE authorities to return to normal operations while comprehensively observing all Covid-19 protocols.”

“As we begin to host a series of exciting races and implement new strategic initiatives, we will continue to work with our stakeholders, club management and relevant authorities to ensure that the return to full capacity crowds at our racecourses is done in a controlled environment that prioritises safety.”

Talking of the new initiative for 2021 which will see Emirati Nationals trained and recruited to supervise races, he said, “we already have substantial involvement from Emiratis through racehorse ownership, and we are pleased to be able to extend this opportunity to competent individuals to help steer and support our operations on race days.”

The initiative, under the directives of His Highness Sheikh Mansour bin Zayed Al Nahyan, Deputy Prime Minister of the UAE, Minister of Presidential Affairs and Chairman of the Emirates Racing Authority (ERA), ERA and Dubai Racing Club, aims to provide the ERA with a professional Emirati stewarding team that is capable of supervising races, in line with the leadership’s vision of empowering young nationals across all fields, including horse racing. As part of the initiative, Emiratis will engage in a number of theoretical and scientific programmes led by experienced professionals with a long history in this field.

Sheikh Rashid bin Dalmook Al Maktoum went on to say “the initiative stems from our leadership’s belief in the importance of investing in UAE nationals and empowering them in the field of horse racing, which is an integral part of our Arab and Islamic heritage and history. We also strongly believe it is time for UAE nationals to engage in the administration of races through this initiative, which is aimed at building national aptitude in this line of work. We are excited to see young Emiratis showcase their skills and develop them throughout the programme, while most importantly, to learn and innovate, as well as to create solutions and ideas that will contribute to the future of our races. I would like to thank HH Sheikh Mansour bin Zayed Al Nahyan for supporting the launch of this one-of-a-kind programme in the region, where our races have become a global success.”

Other Announcements in UAE Horse Racing

According to WAM news-agency, Mohammed Saeed Al Shehhi, the recently appointed Director General of the ERA, announced closer collaboration with neighbouring countries. He said, considering the key role the Gulf has been playing in the growth of global horse racing, the Emirates Racing Authority is strengthening its partnerships with authorities in Saudi Arabia and Bahrain to grow the sport in the region.

“We are delighted that our partnerships with neighbouring countries promote close coordination and united efforts among horse racing authorities,” said Al Shehhi. “We will expand our cooperation with our counterparts in Gulf countries and share ideas and expertise that will help the sport to develop further and create promising opportunities for the entire horse racing community and equestrian industry.”

The news-agency also reported the 2021-22 season will see races being split into two divisions if they receive a large number of declarations. The ERA said it will compensate for the appropriate prizemoney to be shared in the case of a split. Connections will only have to pay a single entry fee for attending all the races that they have entered.

The ERA is also looking into the possibility of allowing horses that were entered for the Dubai World Cup Carnival to compete at races in Abu Dhabi and Jebel Ali Racecourse in major Patter Races like the National Day Cup, Jebel Ali Stakes, Mile, and Sprint, should quarantine regulations allow. Until recently, Carnival horses were only cleared to race at Carnival events.

In addition,  it has been announced that Mark Bird, the Irish Turf Club handicapper with over 20 years of experience in racing, will be joining the ERA in the same capacity for the 2021-2022 UAE racing season.

The inaugural weekend of the 2021/22 season saw something for everyone, with Thoroughbreds racing at Jebel Ali and Arabians in Sharjah.

Jebel Ali’s seven races ranged in prize money from 60,000 AED to the highlight of the day’s Emirates Airline 1200m with a purse of 96,000 AED. The race was won by Ababil, owned by Al Rashid Stables, trained by Doug Watson and ridden by Sam Hitchcott.

On Saturday, the Sharjah Longines Racecourse hosted its first meeting of the 2021-22 season with six races. The most anticipated was surely the AED 100,000 HH Sheikh Dr Sultan bin Khalifa Al Nahyan Cup for Purebred Arabians over 1700m.

This upcoming weekend sees Meydan open its doors on Thursday 4th November 2021 with seven action packed races culminating in the 1400m Graduate Stakes, and on Friday 5th November, Al Ain racecourse also starts with seven inaugural races, one of which is the 1400m for Private Owners.

Equitrans has been supporting the racing community for almost 20-years, and continues today with world-wide international racehorse shipping and regional road transportation.

If you would like more information on the Equitrans service for racehorses, both globally and across the GCC region, please email us at info@equitranslogistics.com